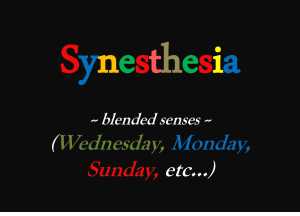 A few months ago, I learned that a mental process of mine had a long Greek name associated with it.  I set out to discover what this mental process was, who else had it, how it helped or hindered us, and how best to take advantage of what I have come to call the “Gift of Synesthesia”.

Earlier this year while walking into work, a field of rye grass and the leaves on a row of eucalyptus trees were going back and forth in rhythm with the blowing wind.  I stopped and stared because I realized that the rye heads and eucalyptus leaves weren’t just moving – I sensed vibrations coming off of them (stronger than normal), perceived lines and waves in my mind, and heard the whole as a symphony in my mind.  It was profound.

At first, I thought I was imagining things and then realized I had joined their symphony by the simplicity of my standing there.  I was swept along in the movements, riding the waves of motion.  Later that day, I checked again – yep, same sensations.  Then, I started thinking about how I used to see and sense similar things when I was a kid, a teenager, in my 20s, 30s, etc.  I realized it was the same.

Synesthesia is basically a blending of the senses.  Some people perceive colored numbers, taste colors, see the entire number line, or see a calendar that rotates in their minds.  For a more complete definition with links and references, check out: wikipedia.org/wiki/Synesthesia.

Okay.  Now what?  How do I best use this for the next 50 years?  I’ve been asking around, learning more, and looking into some possibilities.

From what I understand at this point, my synesthesia manifests itself in multiple modalities.  There are lots of different reactions in my head to the various inputs.  Each sense evokes a unique response at times, while some senses constantly blend together multiple things.  Wednesdays are muted-green; Mondays are blue; etc.  Recently, when I was looking through a collection of pictures from a friend, I saw a pink flamingo and “Tuesday!” came to mind.  I know – it might sound weird – but there you have it.

I believe that’s where part of my intense creativity comes from.  I haven’t always known what to do with the artistic words, images, paintings, pictures, poetry, music, and lyrics that have appeared in and flooded my mind over the past four decades.  I’ve expressed some through books, songs, and teaching.  But I’ve filed away many others in my brain, waiting for the right time.  Maybe that time has finally come.

Another example that comes to mind is a car I bought from a friend who was moving out of town.  Carnell smoked a lot and used a particular gel air freshener to cover the smokiness in the red Lincoln.  Every time I got in that car, I told him that it smelled “purple”.  We laughed about it.  But he finally understood what I meant when I discovered that one of his air freshener gel cans had slipped down inside behind the glove box next to the heater core.  So, that thing was just pumping out a deep cherry-purple smell every day!  I finally got rid of the odor in the car, but every time I smell it in the aisle in a store or in an office somewhere, it immediately takes me back to Carnell’s red Lincoln…purple.

Also, if I tilt my head a certain way while looking at the computer screen, some of the letters turn green or purple.  Other words pick up a reddish or yellowish hue around them.  Now, that might just be the lighting of the screen, but either way it’s pretty darn cool.  I tell myself that the letters are all just plain black, and they won’t distract me.

Sounds are especially a hot topic for me – always have been.  So, I’ve carried earplugs with me for the past 20 years.  At parties and sports events, I wear them to take the edge off, yet can still hear conversations just fine.

I tried to talk about this “thing” with others when I was 5 or 6 years old, trying to understand it.   We were out on the playground at school, and the trees and grass across the road were blowing in the wind.  I asked one of the teachers, “Why do the leaves do that?”  “Do what?” she asked.  “That,” pointing at them moving.  She looked at me a little confused and replied, “Well, the wind’s blowing.”  I looked back at her and said, “No, I got that part.  I know that.  But what makes the vibrations come off of them?”  She grinned slightly and said, “You have a very creative imagination.”

After a couple of years of mentioning it or asking people about it when was young, they implied that I was making things up, that I was nuts, or was just being weird.  So, I kept it to myself.  But, it’s still been there every day – just didn’t know what it was.  Now I do.

Since realizing what “this” is, I’ve decided to let it run.  It’s been a very fun couple of months!  I feel like I’m finally me, again.

If you think you may have synesthesia or know someone else who does, I would love to hear about your/their experiences.  You can also find out more by answering some questions at www.synesthete.org .  The site is run by a research lab at Baylor University in Houston, TX.

#  #  #
Thanks for stopping by, today.  I hope you liked the post!
For more stuff, check out www.amazon.com/author/reep